Reforms that would open Mexico's energy industry to foreign investment
turned  out less aggressive than some oil and gas companies would have liked,
but the  proposed changes are still likely to make some private firms into
winners,  analysts say.   More ...

Latinos will dominate the U.S. labor force of the future, but the time to decide
what type of workers they want to be is now. Choosing the right job or career
path today is essential to increasing their chances for economic and social
attainment tomorrow. For Latinos at that crossroads, there are benefits to
considering “going nuclear.” 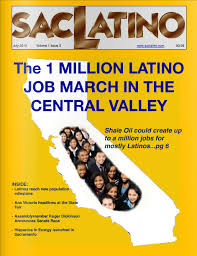 Is California headed toward another “Gold
Rush”?
By Adrian Perez, Editor-in-Chief, SacLatino
Magazine

EDITOR’S NOTE:  This is the first in a
series of articles regarding jobs in energy and the hydraulic fracturing of  shale oil rock known as “fracking.”  Is there a Latino job boom on the horizon?


SACRAMENTO, CA -- At the
recent Hispanics In Energy Summit in Sacramento, it was revealed that energy
jobs could reach over one million in California by 2020, due to workforce
retirements and new jobs created especially in the oil industry. The new jobs
will be created primarily in California’s Central Valley, which cumulatively has
the nation’s third largest population of Latinos, and claims the nation’s
largest deposits of shale oil.
Energy experts
and economists view the extraction of shale oil as a solution for California’s
and the nation’s dependency on imported oil. It is estimated by the U.S. Energy
Department that the Central Valley could produce 15.4 billion barrels or 64
percent of the nation’s total shale oil resources. Moreover, the extraction of
shale oil using a process called hydraulic fracturing could create up to one
million new jobs in an area largely populated by Latinos.  More ...